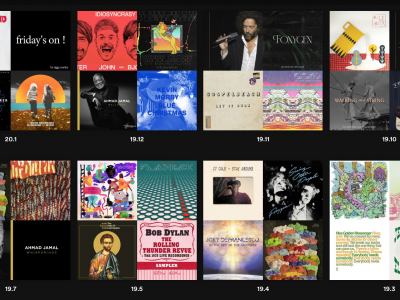 Well… another year come and gone. I make a new playlist every month that you can find on @ https://open.spotify.com/user/windhamdavid . I try to use only new releases and some re-releases to make up the playlists. I keep track of all of my listening details over @ https://davidawindham.com/studio/music using the Last.fm API @ https://www.last.fm/user/windhamdavid. Year over year since I’ve begun tracking them in 2007, Bill Evans is taking the lead again. There’s a lot of it to go around. Just the Bill Evans recordings posthumously released (Fantasy, Verve, Riverside, Village Vangard, etc) would be about 50 CDs worth or recordings. I really don’t tire of him. There were a newly couple newly recorded albums that stuck out last year. The various ‘music year in review’ articles from other publishers have become a ‘wash’ for me mostly because my taste have gotten crotchety like an opinionated old man. I still like to browse through all kinds of new music, I pay some attention to other curators, and I like to listen to various shows. The music discovery mechanisms have gotten pretty good, but I feel like they suffer the same kind of ‘information silo’ ( https://en.wikipedia.org/wiki/Information_silo ) effect that plagues any other algorithmic driven data. There are some errors in my data because of the way single tracks are pre-released before the albums. I’m kinda weary of the ‘first to market’ approach to releasing single tracks for streaming because I miss the old days of being excited to hear an album in it’s entirety. I’m sure my tastes tend to lean towards my experience… after all I did wake up this morning trying to convince my better half how good the Bob Segar Live Bullet album I used to listen to as a teenager mowing grass is. Here’s what I was listening to in 2019: