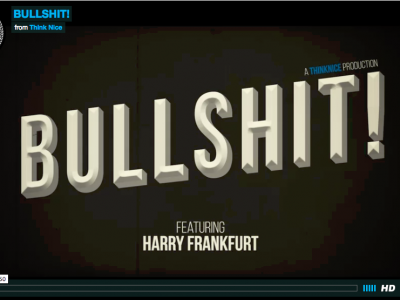 Sometime ago when I was a teen I remember riding in the boat late one evening while camping on an island with friends and toasting the start of my own secret society. We called it the ‘No Bullshit Club’. I think the title pretty much summarized the motive behind the club. Maybe we called the group to order twice. I might start it back up sometime soon though to address our current political climate. I thought about it recently though and wondered about the origin of the term. So the first cited etymology reference is to T. S. Eliot, who between 1910 and 1916 wrote a poem entitled “The Triumph of Bullshit”. Although it likely had been in the vernacular before then. Pound, Eliot and Joyce all lexicographically implicated in the origins of bullshit.2 This video was based on the essay written by Harry G. Frankfurt.3

It struck a chord with me. The notion that “you can’t bullshit and bullshit artist” seems to cross my mind, implicating my expertise when it comes to bullshit. I’d certainly consider it a tool in my belt and I might have inherited it honestly as it seems my family has it’s fair share of excrement artists. I used to use the word raconteur to describe myself because it seemed to fit a skill that others always seem to mention that I’m particularly good at. Owning up to said artistry, I certainly agree with Harry Frankfurt on the subject and I’ll be sending out invitations to the original club members sometime soon.